DOWN A VERMONT MEMORY LANE

Some time in the late 70’s, I stood on a bridge in South Londonderry, Vermont, at sunset, looking out at the West River.  There were storm clouds clearing and an incredible light and colors of rose, yellow, lavendars, greys and whites reflected against billowing clouds.  I loved the drama of that sky!  The air was crisp and clean with hints of spring coming – my guess it was sometime in late March or early April.    We lived on the corner, at the junction of Route 100 and Winhall Hollow Road, just below the Londonderry Inn where I worked.   The river was a steady presence of the beauties of nature as it meandered through the village.  I liked being close to it, witness to all it’s seasonal stages, sounds and scenes it presented.  Camera in hand, I took a photo.

Some 35 years later, in my slow attempt to sort all my boxes of prints, I came across the photo, long forgotten.  Potential painting, I thought and put it in my folder of “painting ideas”, leaving it at that for some time longer.

Inspiration, and a Painting Challenge

There’s nothing like a couple of new canvases to get inspiration going.  Sometimes I like to just put a blank one on the easel for a few days, waiting to see what calls to my artistic muse.   I did that with a 20 x 24 canvas that sat for a week until I had the urge to look in my painting ideas folder.  Found again was the West River photo.  I was inspired, but I hesitated, wondering if I was up to the challenge of capturing the mood of the scene. I know that falling into doubt is a sure killer of inspiration, so I plunged ahead, taking it in slow stages – basic wash of color, then a light charcoal sketch.  I let it sit for another week before I prepared my painting pallette, finally starting in, laying a foundation of color contrasts of light and dark.

Once started,  the  painting process consumed me – day and night. This one was intense. If I couldn’t sleep, I found myself in the studio at 1 or 2 am, painting in PJ’s,  crawling back to bed to sleep off my odd hours burst of euphoria or to the kitchen for coffee to keep going.  I had to leave it for fresh air and walks and food, or a long restful nap.  I am careful not to paint when I feel too tired, even though I want to keep going in spite of it, but I know that’s when the flow dulls.  Rest periods give me a chance to study the stage I am at, contemplate next steps, what little subtle touchs are needed that make a big difference.

I wanted to take it slower, but this painting wouldn’t let me, it seems.  I painted long hours instead.   I stepped up to meet my self-imposed challenge.  In doing so I’ve expanded my experience as an artist, learning a lot along the way.  I find that each painting allows me to reach further, be bolder, experiment more and more.  Crush the doubt, silence the inner critic as soon as possible and just begin!  If I get stuck, I leave it for a while and consult the old masters.  The painting isn’t photo perfect, but it’s my interpretation of that moment in time. It is the feeling of the scene that was important for me to capture and share.

Even though signed and dated,  I will let the painting sit on my easel for a while to contemplate it’s completeness, letting my eyes rest from it a bit, and maybe tweak it here and there.  I suppose the tweaking can be endless, but also good to understand when to stop. This one will be framed in a beautiful wood frame that compliments the scene.  I’ve had it in my collection of old used frames for a number of years, waiting for the right painting.  Whether this painting of the West River will make it’s way into a gallery or not, is yet to be seen.  Some of my paintings are too nostalgic for me to let go – this may be one of them.

West River, So. Londonderry, VT – On The Easel 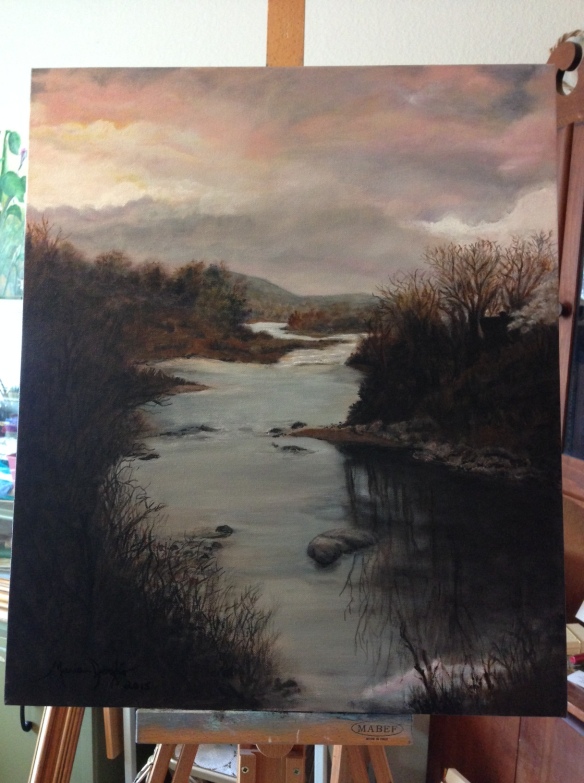 2 thoughts on “On The Easel – A Painting Journey”