Playing with Bits and Pieces

It started with a Whole Foods Market 10 x 12 wooden box used for a catering delivery. It hung around my studio for a year.   I always had it in mind to make a little decorative stenciled tray out of it, but never followed through, so it sat gathering dust on a shelf.

How one thing leads to another always fascinates me when you stay open to imagination and play around with creative possibilities.  I had a box, I had a small painting and many bits and pieces of gathered items that had collage possibilities.  I had sat around in my studio with pieces before me on a table, a bit stuck on how to present ideas for some of my mixed media art creations – nothing was coming together in a way that I liked.   I grabbed the box and rather mindlessly began to “doodle” with the bits and pieces.  The small painting of a beach didn’t fit in the frame for which I had intended, so it made it’s way into the center of the box.  Broken ceramic doll pieces lay about.  One had inadvertently lodged itself into a moon shell.  Hmmmm, that’s interesting.   I had a broken clay shard that I didn’t want to throw away – how could I use that?

The whimsy factor began to take hold!  I dug further into my collection of shells and findings and kept on playing with the piece.  I didn’t know where it would take me, I just let it evolve.  I was having so much fun, it was hard to say “stop”, it’s completed.  The final whimsical touch was a little rabbit, right out of Alice in Wonderland, popping out of its barnicale hole.

Sea Urchins was the final result.  (see below).   The process of creative doodling, keeping a whimsical frame of mind that is open to what shows up, set me on a roll of other pieces of mixed media and textile art (check out my felt flags under Textile Art)  The process is liberating, because anything goes.

Often, “mistakes” can turn into creative opportunity that pushes you to go a step beyond original intentions.  Next time you are stuck or not feeling the ideas are flowing in the way you want, gather all your “stuff”, sit down and just play.   It might amaze you what turns up!

Little doll piece that got “stuck” in a moon shell – which ultimately “unstuck” my imagination for this piece. 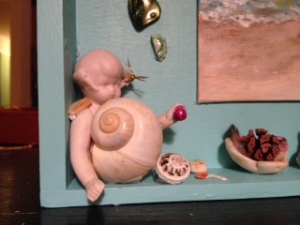 Rabbit, popping out of barnacle to play with urchins 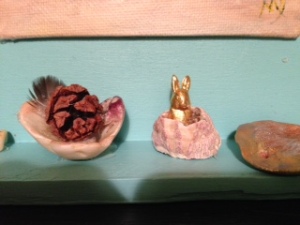 Urchin Playmate peeking out behind shell. 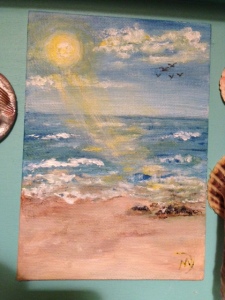 Small sea scape painting that was the initial inspiration for the collage.